Two posts in one day!

I unexpectedly got an hour to squeeze in a swim today.  So after writing my CSS/Intervals post earlier, I thought I would have a go at the 20 x 100 @ CSS pace I mentioned earlier.

A few differences from the last time: I was in a virtually deserted pool with a lane to myself; It was the day after a fairly strong 8 km swim and I was a little achy in the shoulders; I had a new pair of Speedo Endurance Jammers on (far better than the last crappy pair of Zoggs which seemed to go all baggy and rubbish after a mere 2 months, acting like a drag suit!).

It was much better this time: 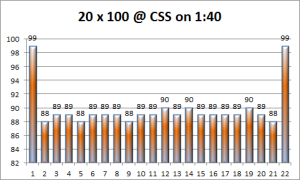 The same 600 m W/U and 400 S/D, but 20 x 100 this time as I had planned.  Also as I had planned I was hitting the CSS target much more closely right from the beginning.  I felt strong, maintaining every other length bilateral right to the end of the set.  At the end I felt pretty worked, but could have carried on.  Brilliant.

The first time I think I was overestimating how hard CSS pace should feel.  It’s not a sprint, it’s just 10% faster than the usual plodding speed.

Day off now before the (hopefully) 13 km on Monday.