It is now 3 months since I started to learn tumble turns.  The previous post talked about some nice progress in a matter of a few weeks, moving from gasping hypoxia after just a few lengths to some decent speed over a mile or so.

Since then I have been in ‘The Plateau Phase’ of progress, where seemingly not a great deal is happening.  I am perfectly capable of nailing most tumble turns quite nicely, with a decent whip, and fairly impressive power off the wall (let’s face it, rugby thighs have to be good for something).

What has been lacking though is the overall level of fitness to be able to push hard at the swimming, over decent distance, while maintaining the tumble turns.

Over the last few weeks I have been gradually chipping away at this, doing longer and longer uninterrupted sets at or below my benchmark pace of 96 seconds/100 m.  (NOTE – this is different to my threshold pace of about 90 seconds/100 m which I used for interval sets).  96 s/100 m is a good level of effort.

Slowly and steadily I have crept up in distance, and today, while only aiming to hit 4.5 km in 1 h 12 minutes, I felt strong enough to push on and hit the 5 km in 1 h 20 minutes. Awesome!  1 h 20 minutes was my benchmark for 5 km straight while training for the English and Catalina Channels, and while I am not yet hitting my all time records of sub 1 h 18 minutes, I am heading in the right direction.

I am much less fit than I was in previous years, but, in the pool at least, my pace is not far off, because tumble turning is faster, for me by about 3 s/100 m I would estimate.

So what next?  Well Alex Knibbs who trains in my pool* has suggested that I might like to consider working a little on what I do after my push off.  Here is a photo of a swimmer looking pretty stylish off the wall….

*Alex is part fish, and awesomely streamlined. I am not sure what his fastest 5 km time is, but a quick Google search informs me that while in his 40’s he swam one in 63 minutes! 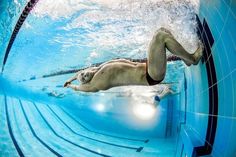 He has started me off thinking about streamlining and dolphin kicking after pushing off. That all sounds quite sensible, but surprisingly hard, for me at least.

First of all, I am already somewhat out of puff after swimming at a high level of effort, and then nailing a tumble turn.  While I normally get a really good push off, engaging my thunder thighs and blasting off uses up quite a lot of oxygen too, which is then in even shorter supply while underwater in the glide.  Throwing in some dolphin kick into the bargain is proving really hard, especially as I am not one who kicks a great deal at the best of times; it is engaging muscles that are not usually used.  Lastly, (rugby again) my knees are in pretty bad shape as well which doesn’t help.

Streamlining is also proving a toughie.  While sitting here in my chair, I can get my arms into a position not dissimilar to that shown in the photo, but it seems hard at the moment to get that done while underwater, pushing off, and wiggling my torso. My shoulder flexibility could definitely improve, so I will be looking for some land-based exercises to help with that.

Much to work on then, but gives me something to think about too!