This week I was working in San Diego.  I took the opportunity again to stay in the cove, and do some swimming.  Dan Simonelli accompanied me again, both on the Tuesday and the Wednesday morning (thanks Dan for your time, and your company).

Tuesday was the day after some quite windy weather.  Dan had warned me that there might be some more challenging conditions than the last time I visited.  As it turned out, there were some good sized waves breaking on the way out, but once past these, it was just a big swell.  A bit like swimming up and down a roller coaster!  As I was waiting for Dan to arrive, I snapped Barbara Held (EC soloist, 2012) and some East Coast visitors, contemplating the water before taking the plunge…. 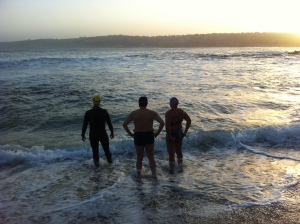 Shall we get in then?

The weather was beautiful this time around, on both days, with beautiful warm sunshine.  Anyone who has spent time in the UK this ‘spring’ will know how precious that was!

On the first day, Dan and I swam across the cove and back, a couple of miles, and it felt great.  On the second day, some interesting stuff happened.  Firstly, as we stopped at the A buoy to remove goggles and admire the beautiful view, a dolphin popped up directly behind Dan (and I mean directly – it couldn’t have been more than 6 feet away!).  Dan turned round, and a few seconds later, the dolphin came past in the other direction.  Wow!  That was quite something, and my first encounter in the water with a dolphin.

We then swam into the shore by the caves, and went in to one of the caves through a narrow entrance.  The cave had a back exit as well as the way we came in, so the swell pushed in and out, throwing you around a little inside the cave which was fun.  Dan took a video, which I will post some time hopefully….

The water was beautiful, and cool but not too cold, not compared to UK waters anyway! 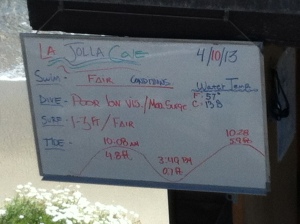 All in all it was a great time on both days, and I went to work feeling a million dollars.  I got to meet only my second English Channel swimmer, local Barbara Held.

Thanks again Dan, and see you next time!

I managed to hit my March target of 100 K in the pool!  I will try and maintain that in April,if I can, but it might not be quite so easy as I am away next week with work.  It could be worse, as I have a couple of chances to swim in La Jolla cove during the week.