In the autumn of 2014 I first enquired with John Pittman about doing a 2-way crossing to Catalina and back.  He was very supportive from the start, and soon enough I negotiated the CCSF forms, medical, and so on, and had a slot booked for my swim on the 19th/20th September.

But why did I choose to do this swim?

After completing the English Channel in August 2014, I felt (and had been told by those present) that I had plenty more in the tank.  I had not been put in the position where I was really challenged mentally or physically to complete the swim, so thought it would be interesting to go and find a swim that put me in that position.  I almost wanted to ‘stare into the abyss’, and learn something about myself when put in a very difficult place.

A number of possibilities were discussed with Helen and others:

So, Double Catalina it was.

I set about training over the winter and spring, which went reasonably well.  I tried a few things with my stroke to make it more efficient which was diverting, but didn’t really translate to any meaningful increase in OW pace.  Overall, I did slightly less training between November and April than I had for my English Channel the year before, but figured I had time to pick that up from May onwards.

In April I enjoyed an early season 6-hour with Kevin Smith in La Jolla Cove at about 16C, which felt surprisingly hard.  After the event, Helen pointed out that while I was reasonably pool fit, all of the extra little muscles required for open water swimming were out of shape, resulting in a harder than expected swim.  There was then relatively little in terms of open water swimming until late June, ‘just’ the crossing of the Strait of Gibraltar with Helen in May, which was surprisingly short at 3 h 16 mins, and a 4 hour in Dover harbour outing in early June.  Late June was the 12 hour overnight Solstice Swim in Dover Harbour, at a bracing 14C.  This was a huge confidence builder, as it my first experience of losing a night of sleep on a swim, albeit without the requirement to carry on afterwards.  Despite not enjoying it one little bit, I did complete.

July and August comprised of two ‘7+6’ weekends in Dover Harbour, and a series of 5 early morning 3 hour swims while in Menorca for Helen’s victorious Menorca Channel Crossing.  A final, and surprisingly tough, 6 hour in Dover at the beginning of September led in to my taper.  Overall, I was underswum compared to the previous year, and had not had Distance Week to toughen me up either.  I was still confident about Catalina though, maybe foolishly so.

All of that said, I enjoyed tapering, and felt stronger and stronger as the 2 week period went by.

As the date of the swim got nearer, more discussions around the detail were had.  After consultation with the CCSF and John the pilot, we zeroed in on a start time of around 7-8 PM on Friday 18th.  The winds in the Catalina are fairly predictable, getting up around lunchtime,  and subsiding in the evening..  According to our plan, I was to leave the mainland around the time the wind was subsiding, and be on my way back, with the prevailing wind direction at my heels, the following day.

On the day of the swim, Helen and I were joined by the rest of my crew for pizza in San Pedro, before repairing back to our apartment to ‘relax’ for a couple of hours.  We all enjoyed the spectacular views over the San Pedro Channel, with Catalina in the distance, while getting the last bits of kit packing done. 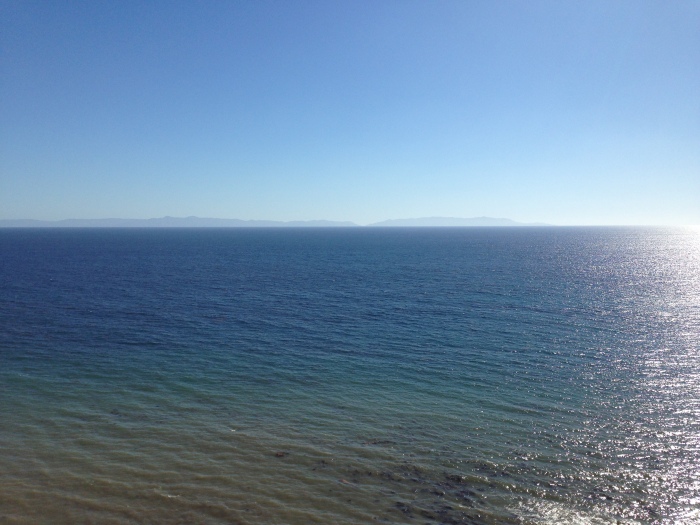 View to Catalina from our Clifftop Loft Apartment

The crew for the swim was as follows:

What an awesome crew!

All too soon, the time came to drive down to the 22nd St Landing in San Pedro to meet the boat crew and the observers.

We found the boat easily and loaded up (as is traditional, my shoulders were not allowed to participate in this process), and found the time for a team photo.

Me and My Awesome Crew

We waited a while for the three observers to arrive, as the LA traffic allowed, first the legendary (and very lovely) Don van Cleve, followed by Sakina Zerrel (first time observing, on a 2-way!), and the excellent Bob Cohen.

Soon enough we were off.  We had an hour or so to motor up the coast to Terranea, heading first out of the harbour past the iconic Angel’s Gate (1913) lighthouse at the harbour exit.

Between leaving San Pedro and getting to Terranea cove, the sun set in the Pacific, while we were all busy on the boat, organising kit, applying a third and final coat of P20, and having the CCSF rules read to us by Don. 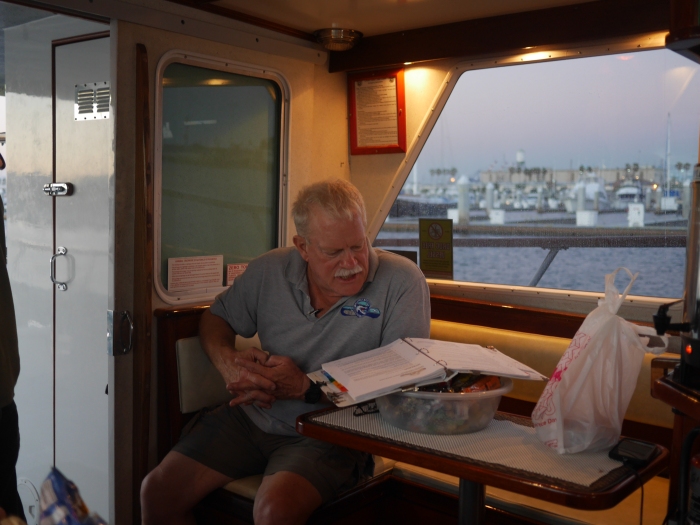 Don Reads Me My Rights 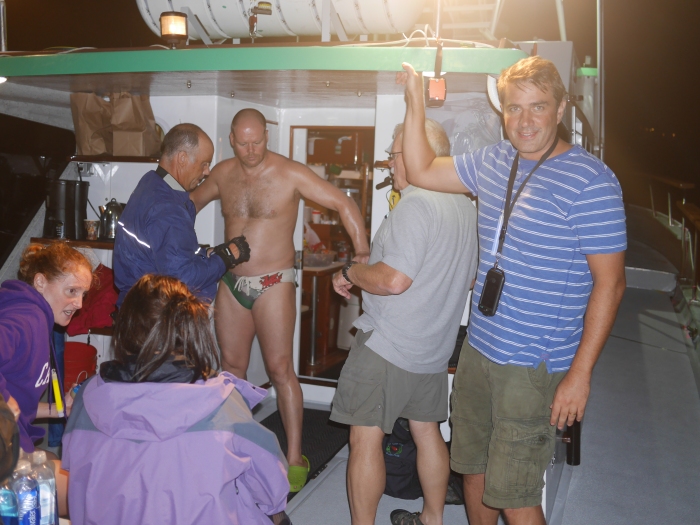 I felt surprisingly calm, now covered in P20, Bronzinc, in just my swimmers, ready to go, eager to go.

At last we arrived at Terranea Cove.  On went the goggles and hat, in went Dan in kayak, ready to escort me in to the start point.  I had instructions to make my way to the beach, exit the water, find dry land, and raise my arms to signal the start of the swim.

I jumped in.  I let myself go as deep as my momentum wanted to take me, savouring the moment.  When I resurfaced, I followed Dan into the beach.  The water was warm, a delicious 74F.  I felt fabulous. 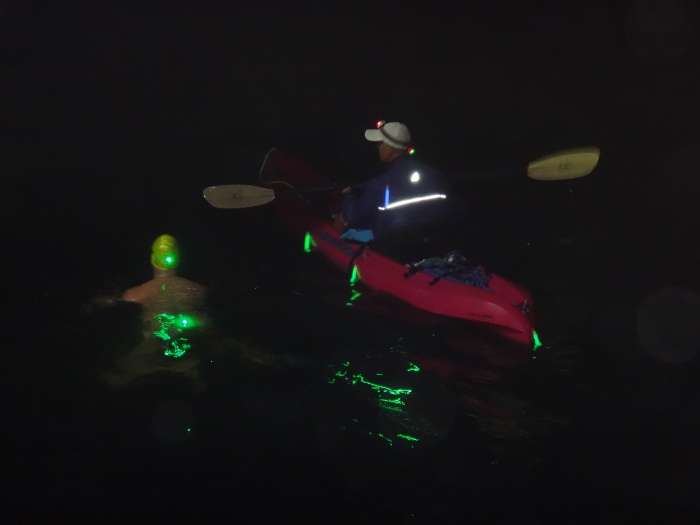 Me and Dan Go In

After only a couple of minutes, Dan directed me in to the part of Terranea Cove where there was some sand between the stones.  I clambered slowly over the smooth rocks and made it to the dry part of the beach.  I turned around and slowly stood up, raising my arms into the air, signalling the start of the swim.

All I had to do now was retrace my steps over the rocks into the sea and start swimming.  The stones were slippery, so I took it very carefully and slowly.  Maybe too slowly.  As I was only half way back to swimable water, a big swell came in and knocked me off my feet, crashing me in to the rocks.  I tried to get up to move back towards open water, and another swell hit me.  There was a lot of swearing at this time.  This was not what I wanted at all before I had even swum one stroke towards Catalina.  I could hear Dan shouting instructions at me, but they weren’t registering.  All I could focus on was a growing sense of disbelief that I was not able to get started on the swim, and that I was getting increasingly battered on the rocks.  The only plus was that the rocks were smooth.  If they had been like the Cap Gris Nez rocks I would have been lacerated all over.

After what seemed like an eternity, but what I am told later was only about 2 minutes, I finally made it to deeper water and started swimming.

The biggest challenge of my life had begun……