I stroked off into the night, sighting off Outrider, with Dan in the kayak at my side.  I spent maybe 5-10 minutes trying to regain my composure after the rougher than expected start to my swim.

The San Pedro Channel is 20.2 miles between the 2 closest points on Catalina and the mainland.  I had double that distance ahead of me.  40.4 Statute miles.  35.1 Nautical miles. 65.0 km.  Lots of numbers to conjure with there.

By now it was completely dark, and the thin sliver of a moon was setting fast into the ocean.  An excellent night for stargazing, especially for those on the boat!  I felt completely safe and ‘looked after’ though; Outrider is a big boat, well decorated with coloured glow sticks by the crew, and Dan in the kayak was well lit up too.

Swimming didn’t feel easy going at first.  There was some fairly persistent head-on swelly chop that I felt like I was continually having to climb over.  It seemed I was making fairly heavy weather of it too.  I continually told myself just to relax, not fight the water, just slip through it, preserve the shoulders for even tougher times that might lay ahead.

I had an hour before my first feed, which passed surprisingly quickly.  I saw the flashing glow-in-the-dark Viking helmet go on one of the crew (it was difficult to tell who from the water), which signaled 5 minutes till feed.  I knew that it would be switched off with 1 minute to go, which would be my signal to come in to the boat, to have my plastic milk carton of feed thrown to me on a long line.  Problem was I lost track of the horns at the back of the boat, where there were quite a few other lights.  I think also my goggles must have misted up a bit.  At the feed I didn’t say much, just chugged down my 350 mL of Summer Fruits-flavoured Maltodextrin, and asked for the horns to go up front in future.  Helen reassured me I was doing fine, with a stroke rate of 52 spm, and on I went. 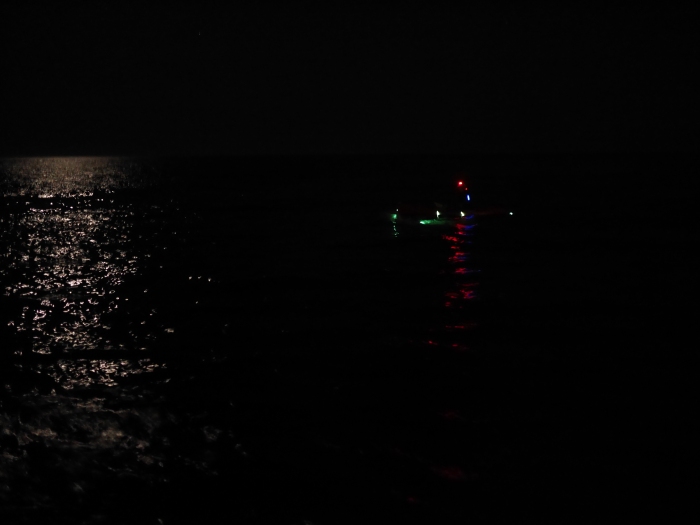 10 Hours of Darkness to Start the Swim

Feeds from then until the end of the swim were to be every 1/2 an hour, mostly just the same liquid feed, with occasional solids thrown in as the choice of the crew, or requested by me if I had a particular yearning.  The second feed went better.  I could see the horns, and again I was told I was doing fine, with the stroke rate settled down to an even 50 spm.

Two hours promised something to look forward to. I had agreed with Helen that she would be telling me how far I had gone, on the hour, so I could mentally map my progress through the swim.  This was a marked departure from any previous swim I had done, where the approach was just to ‘swim from feed to feed, trust your crew, turn your arms over until you get there’.  While I knew this approach was slightly risky to be attempting on such a major swim, I was confident it would help me mentally, give me something to think about, do lots of mental maths, tick off the distance mile by mile, percentage point by percentage point.  This is how my mind works.  This is how I got through the Solstice overnighter in Dover, when I was chilled to the bone and miserable, by chunking the swim up into milestones.

While chugging on my drink and enjoying some banana at the 2 hour feed, Helen informed me that I had gone 1.75 nautical miles.  I think I asked her to repeat it as I was sure I had misheard.  ‘Oh that’s slow’ was all I said, before swimming on.  Seriously?  1.75 Nautical miles in 2 hours?  This was awful news.  I had felt that I had been making heavy weather of the swim with the conditions still annoyingly choppy, but I had still been hoping for something around 3 nautical miles.  At this rate my first crossing was going to take way longer than I had hoped.

At the 2.5 hour feed, Helen tried to clarify that she was using nautical miles, that the whole first leg was only 17.5 nautical miles, and that 1.75 nautical miles was not slow.  I was still confused as I swam towards the 3 hour feed.  I was frustrated wits the thought that maybe Helen was ‘just being nice’ and dressing a pace of less than 1 knot up as good to keep my spirits up, when I knew it was rubbish.  I was seriously unhappy.

At the third hour, Helen told me that I had covered 1.8 nautical miles.  What?!  ‘You mean I have only covered 0.05 of a nautical mile in the last hour?’ I pleaded. And that was when the penny dropped.  We had been talking at completely crossed purposes.  Helen had been giving me the distance covered in the previous hour, while I had been expecting information on total distance covered.  I can’t believe in retrospect that we didn’t nail this one.  I consulted my swim plan afterwards which stated simply, ‘I will be receiving information on my progress during the swim, at hourly intervals.’  I am supposed to be a scientist, yet had written something so gloriously open to interpretation.  I had probably even confused myself, as Helen was only doing what she had been told to by me.

I cursed myself, while at the same time internally whooped with joy.  I was making good pace after all!  This was confirmed at the 3.5 hour feed when Bojan told me I had done 6 nm (11 km).  This just got better and better.  At this rate I was heading for a first crossing time of somewhere around 11 hours, way faster than the ‘par score’ of 13 hours I had planned on.  At this time, somewhere around midnight, the ocean started to flatten out, and I started enjoying my swimming more and more.  The miles kept on tumbling, as I swam, super-relaxed, settling in to a consistent 48 spm between hours 4 and 8.  I was marveling at the very many small pairs of eyes that appeared out of the gloomy depths, before disappearing as quickly as they came.  I also started to get stung around this time, lots and lots, by small little ‘no-see-um’ jellyfish, that just sprinkled a little mildly-painful poison, which only hurt for a few minutes each time.  I congratulated myself that they were so mild, unlike the mauve stingers in Menorca, which packed a real punch.

At around 10 hours in to the swim, the sky started to lighten in the west, and dawn was on its way. 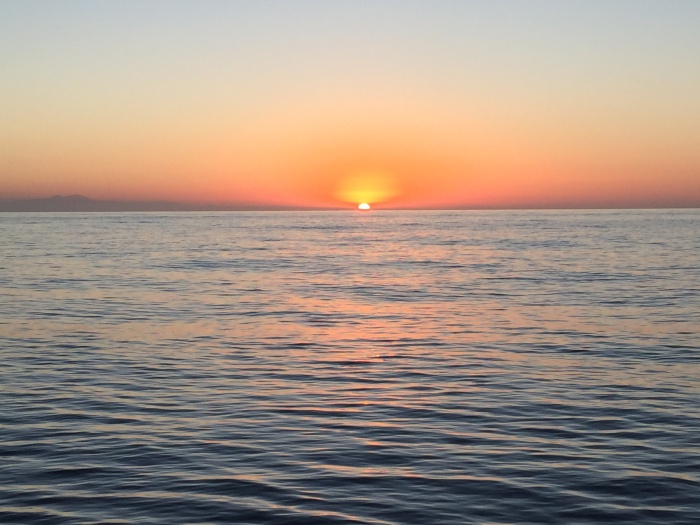 In the 10th hour, as well as getting light, my progress started to slow.  After 9 hours I only had 3.2 nm to go, but each 1/2 an hour only chipped off 0.5-0.6 miles off that.  At 10 hours I shouted ‘Is there a current or something?’  Indeed there was; the first leg which had been going so unexpectedly quickly had a sting in the tail.  A strong cross current was scrubbing chunks off my forward speed, and it took me nearly 3 hours to complete the final 3.2 nm.  But what swimming it was!  The approaches to Doctor’s Cove on the Island were incredibly beautiful, as some of the crew’s pictures show:

At 11.5 hours, Helen asked me if there was anything else I wanted at the turnaround.  “A new pair of shoulders!’, I replied.  I was starting to feel the effects of a single channel swim.

Finally, after 11 hours and 53 minutes, I made it in to the beach.  Dan had already kayaked in with ‘supplies’ for the turnaround.  Helen jumped in off the boat and swam in after me.  I clambered up the beach, cleared the water, and raised my arms into the air, the first leg complete. 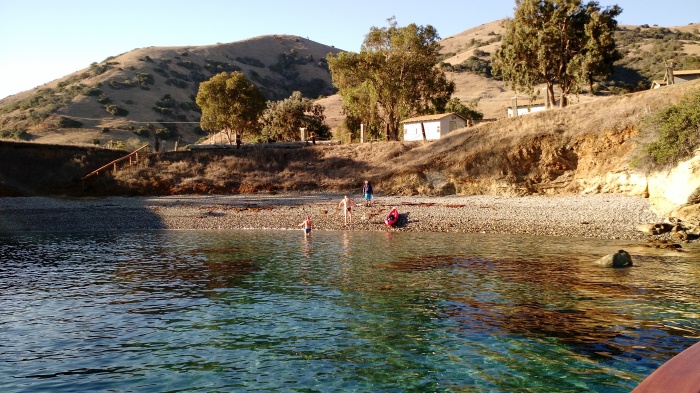 After raising my arms in the air, I promptly fell over.  Sitting down seemed like a reasonable place to be, so I stayed there, sat on the beach and looked around.  What a beautiful spot!

We then set about getting me ready for the second leg.  Dan had brought in a towel, a large tub of runny zinc cream, and an improvised back-scratcher / lotion-applyer that Helen had rigged up.  Under the rules, neither Dan nor Helen were allowed to touch me at the turnaround, so I dried my back and shoulders down, and daubed them with zinc, ready for a full day in the Californian sun. All this activity took a total of 7 minutes, at which point I stood up, raised my arms once again, and stepped back towards the water.

I could hear the cries of encouragement from Helen and Dan on the beach, and everyone on the boat, and set off once again, diving back into the crystal clear waters of Doctor’s Cove.  In mid dive, I was completely overcome emotionally with what was about to happen, the enormity of the task ahead, and the wonderful belief and support from the people who were supporting me.  For a dozen or so strokes I basically blubbed, crying into my goggles as I began the journey back to LA.