I have a colleague Bojan at work who has been getting in to his swimming over the last 6 months, working his way up to 4 km pool swims, and improving his speed and technique, following a very similar path to the one I trod before him.

I had offered to take him to the river earlier on in the year, but he opted to concentrate on the pool work.  It was to my surprise, therefore, when he asked if he could come with me to the river last night for his first dip in the Cam.  I explained that it wasn’t especially warm now we are half way through November, but he was undaunted.  Scared yes, but undaunted, no.

Helen G and I discussed our approach, and agreed that we should be cautious in how we introduced a complete noob to sub 10C water, especially at night.  It is one thing if you work your way down gradually from higher temperatures, but another altogether if you go straight for ‘quite cold’ water.  I started swimming in the Cam in late summer when the water was still up at 17, and it has crept down since.

We agreed that Bojan would go in first, followed by me, with Helen remaining on the bank still in warm clothing.  We would swim upstream a short way, and back, a couple of times, and get out after < 10 minutes, to avoid an unpleasant rewarming.  Only once we were out and getting dressed would Helen go in for her own dip.

Bojan was a trooper.  I wanted him to go in first, to avoid the scenario where I got in, and then he ummed and aahed over his entry, leaving me to get nicely cold in the water.  There was no such issue though.  He went confidently down the steps up to his waist, then collapsed backwards into the inky water.  There was some very minor grunting and gritting of teeth while he got used to the feeling of the cold water, then I dived in and joined him.  We swam a little head up breaststroke for a while, before I asked him to do 4 strokes head in front crawl.  Then we did a little longer, then a little longer still.  I guess we went 50 m upstream, and he was feeling fine.  Despite that we opted to swim back to where we had got in.  While he was feeling OK, we didn’t want to risk him becoming ‘not OK’ a fair distance away from our exit point.  After getting back, we repeated the up and downstream routine, then got out up the steps of the Riverbank Club.

Back to the shed for a quick change and rewarm.  Rerwarming was OK last night, as we couldn’t have been in more than 10 minutes.  Helen took this photo before going in for her dip. 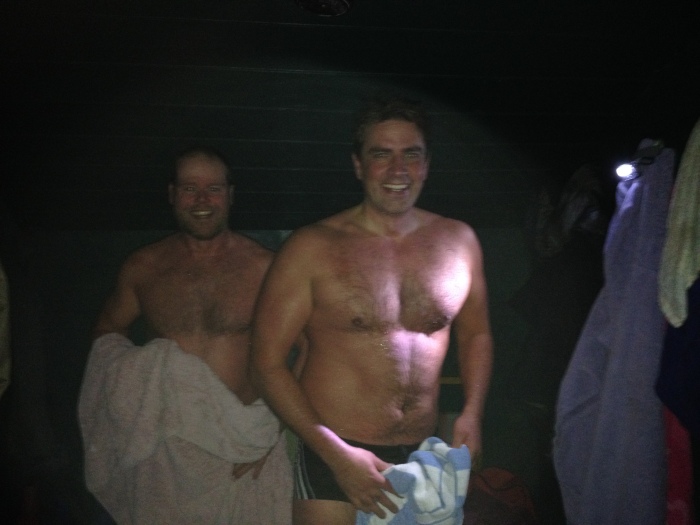 Note the big smiles.  It really was lovely last night: the river was fairly high after recent rain, but mirror smooth and velvety on the skin.  It had also not dropped in temperature as much as I had expected, holding up at 8.5C, but feeling warmer than the Ouse had at 8.7C a few days earlier.

Bojan didn’t even shiver, the sod.  You will see from the photo that he is a giant of a man, and has a good deal of natural core insulation.  He will be swimming the Channel one day, you mark my words.  I wonder how many Serbians have preceded him?  Answers on a postcard please…….